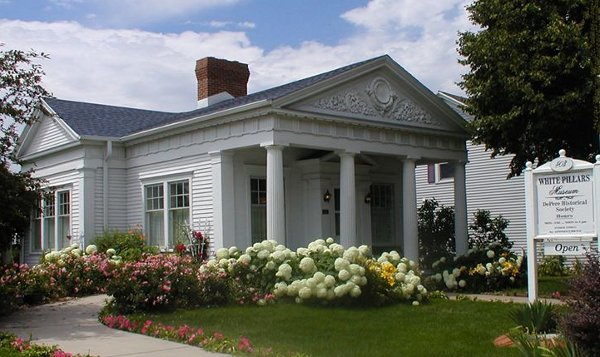 The building that is now White Pillars Museum has served numerous roles over the years. Built in 1836, White Pillars is the oldest building in De Pere and is listed on the National Registry of Historic Buildings. Originally, in the era before steam power and electricity, it served as the headquarters of the Fox River Hydraulic Company. The mission of that company in the early 1800s was to construct a dam across the Fox River at De Pere, harness the water-power of the flowing river, and put that energy to work through various commercial enterprises such as water-powered mills and factories built from east to west across the river atop the shallow rapids. Among the original stockholders of this hydraulic power company are names familiar to De Pere residents, such as William Dickinson, A.H. Arndt, Morgan L. Martin, John Lawe, and Randall Wilcox who served as company president. Originally, the building known today as White Pillars was located on North Broadway near the corner of George Street. It was moved to its current location at 403 North Broadway sometime in the 1860s.

White Pillars has served the community in many different roles over the years. After acting as an office and bank for the hydraulic company it housed De Pere’s first newspaper, The De Pere Advertiser, in 1851. During the next 60 years it was used as the meeting house of the First Episcopal Church and also served as a barber shop, an antique shop, and a private school. In 1913, local building contractor Alfred Fleck purchased the building and used it for his private residence. It was Fleck who enlarged the building, replaced the squared timbers that support the front porch roof with our beloved four “White Pillars” and added the decorative triangular frieze above the front porch. Fleck sold the building to jewelry store owner Henry Vander Zanden in 1930. Other individuals resided in the house over the ensuing years including Mr. and Mrs. James Ossefort who owned the building in the 1940s. Their granddaughter, Marsha Berken, is seen below in the photograph sitting on the stairs of White Pillars. The last person to reside in the building was Miss Elizabeth Goffard, who owned and lived there until 1972.

White Pillars was purchased by the De Pere Historical Society in 1973 for use as a museum and since that time has served as a repository of De Pere’s past history, even as our community’s history continues to evolve. From the ice cream socials of the 1970s to the creation of the Society’s technologically cutting-edge Museum Archive Research System, White Pillars Museum and the De Pere Historical Society have transformed together in order to meet the challenges of an ever changing world while never wavering from the mission of preserving our community’s heritage.