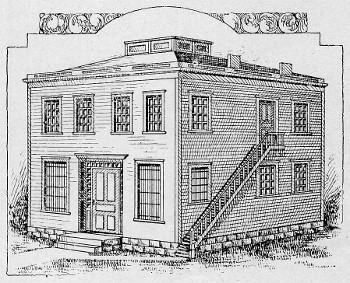 The only “known” image of the court house.

Many years ago, on October 26, 1818, Michigan Territory was divided by an Act of Congress into three counties: Brown, Crawford and Michilimackinac. The same Brown County we know today then encompassed an area equal to the eastern half of the current State of Wisconsin. The very next day, October 27, 1818, Lewis Cass, Governor of the Michigan Territory, appointed Matthew Irwin to be Chief Justice, Commissioner and Judge of Probate for Brown County, along with an associate justice and justice of the peace, sheriff, commissioner and clerk. However, another five years would pass before Congress created a separate judicial district for this three-county area. During those five years, important criminal cases required prisoners to be transported by canoe to Detroit for trial.

To improve the justice system, the first Circuit Court for Brown County was created when Governor Cass administered the oath of office to James Duane Doty on June 30, 1824. Judge Doty’s circuit included all of Michigan’s Upper Peninsula, the entire tract afterward comprising of the State of Wisconsin, and north of the St. Croix River and east of the Mississippi to latitude 40 degrees, now part of Minnesota. When the question of a county seat for Brown County arose, Governor Cass authorized any location within 6 miles of the mouth of the Fox River. Local justices could not agree about this, so in 1825 a committee determined that the seat of justice for Brown County would be a log house erected for that purpose at Menomineeville (or Munnomonee or Shantytown) along the east shore of the Fox River (in current-day Allouez). A map of Munnomonee dated September 5, 1825, and recorded with the Brown County Register of Deeds January 4, 1829 (and also October 6, 1826) shows a 400 x 330 foot plot of land described as, “Donation of Land to the County of Brown; as a site for the public buildings the seat of justice of said county having been established upon this lot Sept. 5th, 1825.” This exact location is today marked by a monument on the grounds of Heritage Hill State Park in Allouez.

Judge Doty traveled his judicial circuit between Prairie du Chien, Mackinac Island, and Menomineeville by horseback and canoe. He presided over the first U.S. Circuit Court session for Brown County on October 4, 1824, at Menomineeville. Doty continued as Circuit Court Judge until he was succeeded in 1832 by David Irvin, a Virginian.

Shortly after the Wisconsin Territory was established in 1836, an act to change the location of the county seat of Brown County arose and a vote was subsequently held in January 1837. A split between the Green Bay towns of Astor and Navarino resulted in De Pere receiving a majority of the votes. Therefore, on April 1, 1837, De Pere officially became the county seat.

But De Pere had no suitable structure to act as a courthouse so before the ice went out that spring, the log courthouse in Menomineeville was dragged up the frozen Fox River to De Pere. Within a year the log courthouse was replaced by a new two story frame building erected at the corner of George and Wisconsin streets in De Pere at a cost of $5,740. The first floor was the county jail plus quarters for the jailer and his family; court was held on the upper floor. De Pere remained the county seat for 17 years, from 1837 to 1854.

The 1837 vote never sat well with the citizens of Green Bay. In 1840 a curious agreement was reached which allowed spring court sessions to be held in Green Bay and fall sessions in De Pere, a custom that lasted for 14 years. During this time, one of the County Clerks had a habit of taking books, records, papers and money home instead of leaving them at the De Pere courthouse. In 1853 the county paid to have all those items identified, inventoried and moved back from a private residence in Green Bay to the courthouse in De Pere.

A year later, in 1854, Green Bay was incorporated as a city and a second vote was held for the right to be the county seat. Green Bay won by a majority this time. All the court furniture and records were taken to Green Bay leaving De Pere’s court vacant; the building’s first floor continued to operate as a local jail. Over the next several years the upper level was first rented out for various community and club meetings and then as a private school for girls until it was finally used for several years as a public school.

Eventually, Brown County sold the building at auction although the local jail continued to occupy the lower level. When the First Presbyterian Church organized in 1849 parishioners held services in the old courthouse building until they were able to build their own church in 1854.

In the early morning of March 12, 1871, the De Pere courthouse building burned to the ground. Two locals had been arrested and jailed two days prior on drunk and disorderly charges. One was released the next day but found himself back in jail again that night. He reportedly told the Marshall that “he’d be sorry” the next morning for putting him in jail again. The two prisoners perished in the fire. An inquest following the event found that the prisoner who threatened the Marshall may well have set the blaze in an attempt to gain his freedom. A stone marker erected in 1930 and rededicated in June 2009 now commemorates the location of the first Brown County Courthouse in De Pere.

Special thanks to the following people and organizations for replacing the marker, which commemorates the site of the first Brown County Courthouse. 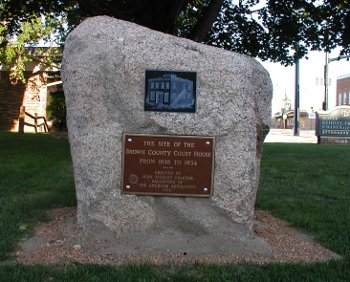 Dedication Marker for the Court House.