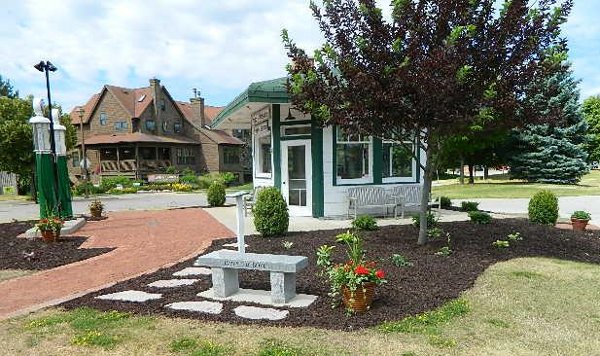 The Polo-Resto Service Station was built in the fall of 1925 by Charles Hall, (1876-1962) a local sign painter and business owner. It was called “C-Hall 4 Service” and was located on the Fox River side of Riverside Drive (old Highway 41), north of the De Pere City limits in the Town of Allouez, Wisconsin. The modest 16 by 11 foot structure had a Japanese style roofline with its broad overhang. Early photographs show that the gasoline being dispensed was from the Sinclair Oil Company. It was an era of development with paved roads and citizens who were eager to purchase automobiles not only for work but also for pleasure and touring.

Hall’s business grew to accommodate this growing segment of society. The first addition to his enterprise was the “Sandwich Shop” right next door. He put in several golf, tennis, and croquet courts, plus a 10 foot toboggan slide. Eventually a row of small cabins was added to the area to accommodate guests who wanted a place to stay as they traveled. This became a very attractive recreational playground on the beautiful banks of the Fox River.

From 1931-1936, the farm fields across the road belonging to the Hocker’s and Conner’s families were used for polo matches and was known as the Green Bay-De Pere Polo Field. Visiting polo teams and spectators took advantage of Charlie’s cabins during their stay for the polo matches. The name “Polo-Resto” became associated with Hall’s establishment.

But time marches on bringing changes to the area. The polo field was replaced in 1937 with Minahan Stadium, a football field for St. Norbert College. Eventually the gas station closed for good and new businesses developed to keep the buildings in operation. This group of buildings at 3808 Riverside Drive was last known as the “Village Gate.”

Development in 2004 was slated for this area and threatened the historic buildings with demolition. Barbara Brebner’s “For the Bird’s” was in the gas station part of the complex. She thought the building was a significant structure from the past and as such should be preserved. She approached the De Pere Historical Society for help. A campaign was mounted to raise money. Letters went out to people asking for help, time was running out. Within a month, $10,000 had been raised and Stephen Stiles of Nicolet Real Estate and Investment Corporation offered the Historical Society a plot of land on William Street next to the Fox River Trail. In August 2004, the little building was moved in the early morning hours to its new location at 201 William Street.

With the move completed restoration on the building began. Several windows had to be replaced. Windows from the former floral shop building were used and modified. The floor was replaced, interior walls reinsulated and covered with new wallboard, new doors, chimney replaced, original light put back in and the building was painted inside and out. Five layers of roofing were stripped off and new roofing that matched the original roof was installed. A concrete walk area was added around the building with a brick side walk connecting to the trail.

The original gas pumps were not common and therefore difficult to find, so two original matching gravity-flow 1925 Wayne visible pumps were chosen. Benches and a tree have been added to provide an area of rest for those using the trail.

Over the past 2 years, 210 businesses and individuals have responded to this project with time, money, and services to help make this dream a reality. The plan is to have the building used by community organizations for special events that occur on the Fox River Trail or in Voyageur Park.

The goal of the De Pere Historical Society is to preserve this building as an example and tribute to the early history of service stations. Historical information is still being sought at White Pillars Museum to complete the long history of the Polo-Resto building.

For their efforts, the De Pere Historical Society was chosen for a 2006 Historic Preservation Achievement Award for Building Rehabilitation/Adaptive Re-Use. 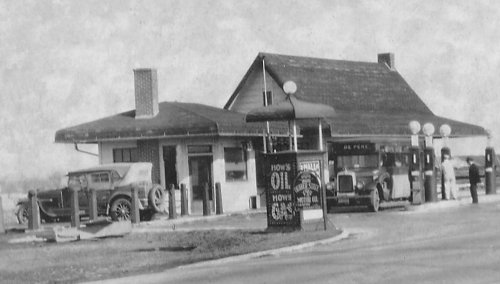