The City of De Pere deserves to be proud of its long historical past which dates back to 1671, when Jesuit Father Clause Allouez founded the Mission of St. Francis Xavier at the foot of the rapids of the east side of the Fox River. The area became known as “les rapides des peres” or the “rapids of the fathers”, it was later shortened to just “De Pere”. Preserving, fostering and promoting this long heritage is the De Pere Historical Society, started in 1970 by the De Pere Chamber of Commerce. 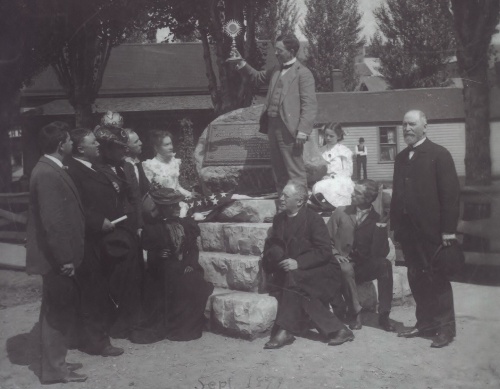 “Reuben Gold Thwaites visited De Pere in September of 1899.
Here he is standing atop the monument commemorating the Mission of Saint Francis Xavier.
He is triumphantly holding the Perrot Monstrance that was given to Jesuit Missionaries of De Pere in 1686.”

The monument, originally located at the corner of George and Front Streets no longer exists.
But we still have that bronze plaque on the upper rock; it’s at the White Pillars Museum in De Pere.
Come in and take a look at it.

The De Pere Historical Society is proud to announce that we have been chosen by the Wisconsin State Historical Society as the 2013 recipient of the Reuben Gold Thwaites trophy. This honor is bestowed upon one historical society in Wisconsin each year for outstanding achievements in sharing and preserving local history. Many thanks to the numerous individuals who contributed their time and efforts towards this achievement over the years as we have come a long way from the ice cream socials of the 1970s. More to come on the date and location of the trophy presentation!